Our planet was designed for life. There is no way to deny it. None of the other planets in our solar system come close. Today I want to focus on something we all know but in likelihood we don’t connect the dots. The fact that our planet has an axial tilt of 23.4 degrees is critical to life. 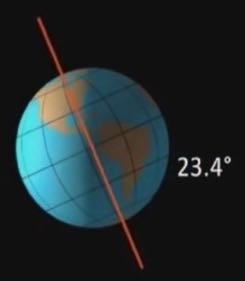 If earth had a greater or lesser degree of tilt our temperature would rise significantly and result in earth temperatures being too extreme for life. The tilt of the earth protects us from direct sunlight (a 90 degree angle to the surface for too long). The fact that our degree of tilt is what it is gives us the seasons we experience. The fact that we have the four seasons across the sub-tropical areas of the earth results in the global circulation of earth that we have. It was almost like it was it designed that way. Oh but of course that’s right; it was designed that way, by God! Last week we looked at diurnal temperature differences and how beneficial they were to life on earth. Seasonal temperature differences make the atmosphere of the earth move and cause the circulation of winds and sea currents and result in earth temperatures changing and being modified. It is what essentially gives us the weather patterns we have. The more extreme temperatures in the tropics is what generates global winds and weather distribution. The heating of the air in the tropics causes wind. We all know that hot air rises. The air over the tropics is forced to rise when it heats and the cooler, more dense air rushes in to fill the gap. Wind!

The rotation of the earth doesn’t just give us day and night but also creates centripetal air movement and circulatory patterns of air and sea movement. If our day was any shorter than 24 hours the rotational winds across the earth would be too severe to sustain life. The fact that we have a moon as close as it is – not too close but not too far (the Goldilocks Zone from last week’s Nugget) – combined with the yearly movement of the earth around the sun gives us lunar tidal patterns as result of the gravitational effect of the moon on the earth. Perfect. Thanks LORD. But it doesn’t end there. There’s more! With God there’s always more.

Have you ever thought about our earth’s atmosphere? I mean really thought about it. It’s perfect to sustain life; despite the fact that we do our best to mess it up. Of all planetary atmospheres in the known universe our earth is the most perfect. Our atmosphere has just the right amount of pressure to ensure that water stays on the planet and that the “air bubble” around our earth stays in place. Once again it is just right to sustain life. The influence of the moon and the absence of other planetary close neighbours once again yields the perfect conditions for pressure and circulation of air.

Our atmosphere is made up of 78.09% of nitrogen, 20.95% of oxygen, 0.93% of argon, 0.04% of carbon dioxide and some other gases in micro amounts. The balance is perfect to sustain life. Think about it. We breath in oxygen and we breath out carbon dioxide with each breath we take, and there are a lot of us. Plants absorb nitrogen and carbon dioxide and release oxygen. It’s called the process of photosynthesis and is fuelled by the light from the sun and is critical to life on this planet. No wonder trees and plant life is critical to maintaining a healthy balance of life on earth. What an incredible symbiotic mixture of perfect balance. If our surface gravity of the earth were any greater the earth atmosphere would contain too much ammonia and methane which would be deadly to life on the planet. Now perhaps you are more aware why carbon credits are so important to the issue of global warming.

The water cycle which we all learned about in school is essential to life on earth. The atmosphere contains water vapour which is maintained by the atmospheric pressure on the earth which holds it all in place. The circulatory patterns generated by the heating and cooling of the planet and the rotational spin along with the annual trip around the sun basically gives us our water and weather cycle. We all know that too much sun would be deadly for us. Some of us experience the result of having too much sun through the summer in all the multiple ways that too much sun can be detrimental to life. Added to the atmospheric circulation I described above we have an oceanic circulation as well. Benjamin Franklin first published the idea in 1786 that there are huge ocean currents which move around the sea and redistribute warm and cool water around the planet. The Gulf Stream carries more than 5,000 times the volume of the Mississippi River around the planet constantly. But the Gulf Stream is only a part of a huge 21,000 km wide current pattern circulating around the Atlantic Ocean. The Psalmist wrote about it in Psalm 8:8. I included that fact in my God’s Awesome Book package. God told us how He had set up the planet in His Word. Job wrote about the springs of the sea in Job 38:16. It is only 40 to 50 years ago that the phenomena of huge fresh water springs on the ocean floor were discovered. Job also commented on water turning to ice and the surface of the sea freezing. (Job 38:29-30) My question during God’s Awesome Book was how did Job, an ancient Near Eastern dweller know about the polar caps on the earth? Simple the Creator of the Universe revealed it to him. God is the One who designed it all in the first place.

I will close with one more little fact, but a hugely important one. We all know that a solid of any substance is heavier than its liquid. Right? Wrong, there is one substance on earth where the solid is not heavier than its liquid. WATER! Water density at 4 degrees Celsius is 1.0 gm per millilitre? The density of ice at zero degrees Celsius is 0.917 gm per millilitre – always and everywhere. I am so glad that God designed it like that. If He had not made that one important switch in making ice lighter than water we would all be dead. That ice floats is a wonderful phenomenon. Because it does, water when it freezes floats to the surface to be warmed by the sun so it can become water again and add to our water cycle. If water was like all other substances and its solid was heavier than its liquid then ice would sink and we would all die. Frozen ice would sink to the bottom of the sea away from the sun’s warming effect and it would cause the oceans of the world to gradual freeze over from the bottom up and the global circulation of the water cycle would cease and so would life on earth. Aren’t you glad that God designed the earth and not man?

We will continue this investigation in the next Nugget.